Península Valdés (UNESCOWorld Heritage Site & Biosphere Reserve) is home to whales, penguins, orcas, sea elephants, dolphins, birds, foxes, rheas, and other bunch of incredible animals. Iberá Wetlands is home to more than 350 species of birds and other animals such as alligators, marsh dears, capybaras, monkeys, and many endemic species. Torres del Paine has increased its number of Pumas, which inhabits Patagonia with other species such as the Condor , the Huemul, and the Guanaco. Like this, the list continues with other places with amazing sepcies!

Wildlife tours in Argentina, Chile, and the nearby

We offer personalized, tailor-made tours, and these are some of the experiences you could live, if you are looking for Argentina wildlife tours. Let us know your preferences and we will customize the trip to match them. 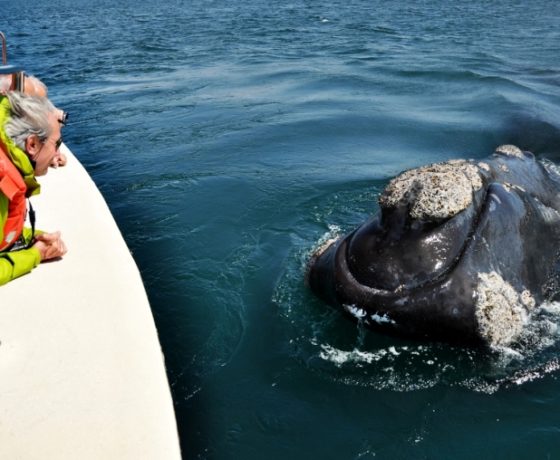 Jaguar Watching, Whales, Penguins, and many other species! Argentina Wildlife tour: animals of the ocean and the wetlands. Penguins, whales, caimans, capybaras, and many other ones!

Travel to Antarctica: Classic Antarctica - Follow the classic circuit on board the M/V USHUAIA, an ideal expedition for those who visit Antarctica for the first time. 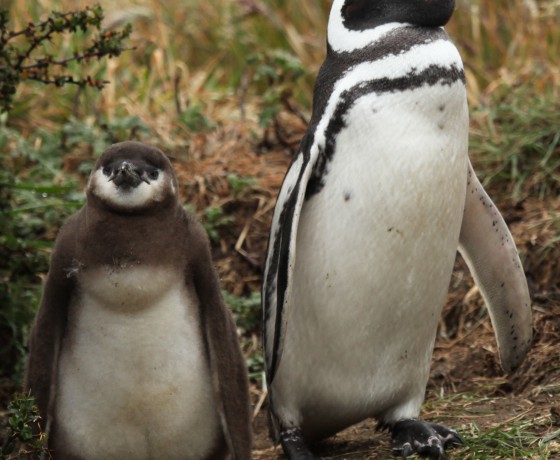 Argentina-Whale Watching and Penguins! Season to find both species at the same time: from ends of september till ends of november. You will be able to enjoy seeing other incredible animals as well, such as rheas, guanacos, etc.. 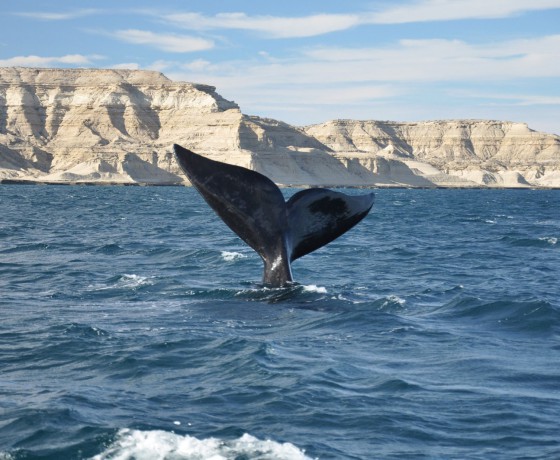 Argentina-Whale Watching and Penguins. On this tour you will be able to combine Puerto Madryn with Peninsula Valdes, staying in a very interesting Ranch, and watching incredible wildlife! Considered one of the richest ecosystems of South America, Iberá Wetlands is home to more than 350 species of birds and other animals such as alligators, marsh dears, capybaras and many endemic species, and is surrounded by pristine landscapes. 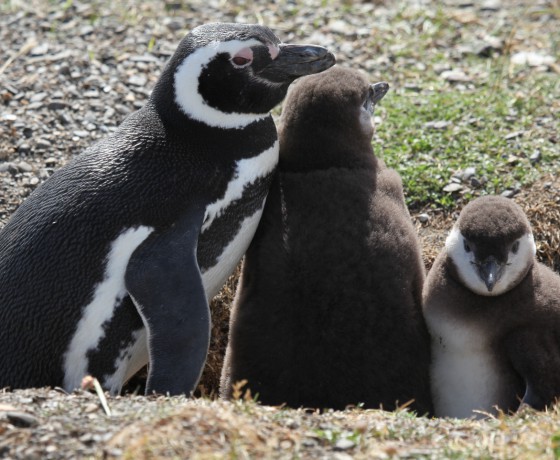 What kinds of animals live in Argentina?

Argentina is home to numerous animal species. Its vast territory and the different environments and weathers that the country offers, allows a biodiversity that is uncommonly seen in other parts of the world.

Some of the most recognizable animal species  (there are many other ones) that inhabit the Argentine territory  (and also border countries) are:

Also known as mountain lion, this feline can be found in most of the Argentinian territory, however, he is reluctant to be seen. It is the main predator of the Andean Patagonia and its main food is  the Guanaco.  It can also be found in Chile and other areas of the American Continent.

This sociable whale species choose the quiet waters of the Valdes Peninsula gulfs in the Chubut province, to reproduce and raise their cubs. You will have the chance to see this amazing animals from June to December. The Magellan Penguin is probably one of the most lovable and popular inhabitants of Patagonia. It can be found in various points of the Patagonian Coast (both Argentina and Chile). Their main populations are found in the Chubut province. They are usually found from September to March.  There are also other species such as King, Gentoo, and Rochopper penguins.

The Condor is the master and lord of the Andean skies (almost all South America). It’s one of the biggest flying birds on the planet.  There are several viewpoints throughout the Patagonia and Cuyo regions where it’s possible to spot them.

This camelid inhabits great areas of Argentinian western territory but it can be specially found in the Patagonia region. It is one of the few mammals that can drink salt water without any problem.   It also lives in Chile. Also known as Yaguareté, The Jaguar is the biggest feline of the American continent.

Even though it was hunted to nearly extinction, the population of this amazing predator is slowly recovering. It can be seen in the northeast of the country.  However, the best place to spot them is Brazil.

The biggest member of the oceanic dolphins chooses the beaches of Peninsula de Valdes to feed from sea lion pups. They use one of the most impressive hunting practices in the world: intentional stranding. It consists of simulating being stranded on the sand waiting for its prey to go down to the sea.  They also live in many other parts of South America and the world.

The huemul, or southern Andean deer, is an endangered mammal belonging to the Cervidae family that lives in the Andes.  It is the southernmost deer on the planet. Its population in the 20th century has been (like other wild species) drastically exterminated by men. In this way, at the beginning of the 21st century, of the thousands that were in Patagonia, there are less than 1000.4.  It’s also very popular in Chile.

It is the largest of the cervids in South America, reaching 2 m in length and 1.20 m in height at the withers.  Formerly extended throughout the entire subtropical area of ​​the continent, today it is reduced to small isolated populations. In Argentina is possible to see them mostly in the Ibera Wetlands.

The Patagonian Choique is a huge flightless bird that can be seen through the entire Patagonian steppe. Outside the breeding season, they live in groups of 5 to 30 birds, of different sexes and ages. Their diet is mainly based on bush leaves and herbs.  It also lives in Chile.

This species of penguin lives on the west coast of South America. In Chile it can be found from the far north of the country to the Chiloe area. In recent years, their populations have been drastically reduced as a result of the scarcity of nesting sites, reduced food supply, predation by humans, and, above all, the impact of severe climatic phenomena, such as El Niño.   Chile is also home to other penguins species such as magellan and king penguins.

This elegant and stylized bird is characterized by its beautiful pink plumage. They acquire this unusual color by eating small invertebrates rich in corotenoids. In Chile they can be particularly spotted in the Suirre and Atacama salt flats, in the National reserve of El Yali and in Chiloe Island.   Likewise, Flamingos can be found in Argentina, in the high Plateau and other areas. Pudú is a genus of cervids native to the Andean region of South America, commonly known as pudúes or also deer, due to their resemblance to other cervids that bear that name. They are the smallest members of the cervid family. Pudus size goes from 60 to 90 cm long and 30 to 40 cm high, they have a short head and weighs between 7 and 10 kg. It lives in trees and dense thickets, from Curicó to Aysén, and also in Chiloé where it is more abundant.  Also in Patagonia Argentina.

Also known as the black dolphin, it is one of the smallest dolphins in the world. Its main characteristic is that its fins are rounded (not pointed like most dolphins); the dorsal fin has a rounded edge and the pectoral fins are oval in shape. It measures a maximum of 165 cm long. They weigh on average 57 kg. It can be seen along the entire Chilean coast.

Also known as Aguara Guazu, it is the tallest member of the canid family.  It lives mainly in the Cerrado – the extensive savannah of Brazil. The maned wolf generally stays hidden during the day; it hunts preferably at twilight, although it is also active at night. It is omnivorous, and obtains most of its calories from fruits and tender roots; however, they are good hunters. They stalk their prey—small rodents, especially rabbits, hares, and guinea pigs, as well as lizards, frogs, and birds—to kill it out of the blue; although they can develop good running speeds, they do not normally chase prey. It reaches 107 cm in height at the withers, and up to 125 cm in length, to which we must add about 45 cm of tail. It can reach 36 kg in weight. The structure of the body resembles that of a fox, although the long legs give it a very peculiar ungainly air.   It can also be found (more difficult to see) at the Ibera Wetlands in Argentina.

The Blue Macaw lives in the Brazilian jungles. It is the largest macaw species. These birds grow to an average size of about 70 cm in length (and can reach 105 cm), with a wingspan of 120 to 140 cm and a weight of 1.5 to 1.7 kg. Its beak is the strongest of all birds, essential for feeding on nuts and hard seeds. Their beak also allows them to crack open coconuts, wood, and other plant matter.

It is a mammal related to the boreal raccoon, but the species is characterized by a long, somewhat pig-like snout and bear claws. Adults measure 41-67 cm from head to base of tail, adding 30-60 cm to their total length. At the shoulders they reach about 30 cm, and weigh between 3-8 kg. The male can be twice the size of the female, and has large, sharp canines. It has strong limbs for climbing and digging, and is reputed for its intelligence. They live in groups of 10 to 20 individuals (normally no more than 60), but the males are solitary, carnivorous and even cannibalistic with the young of the species. They sleep in nests, which they make, in the treetops. They can be easily spotted in the Iguazu falls area.

It is the biggest species of anteater. Its body measures 50 cm in length and its tail from 150 to 180 cm; it weighs from 120 to 200 kg. The snout is very elongated and conical. The tongue is 75 cm long and is covered with a sticky substance to capture the insects it feeds on.  In Brazil, it can we found in large areas of the Amazon, the Chaco and the Atlantic Forest.  Also in Argentina, in Corrientes, Formosa and Chaco.

The tapir is a mammal of the order of the perissodactyls, like horses, zebras or rhinoceroses.  This animal is of a moderately large size, although depending on the species, its size may vary. It is approximately two meters long and can weigh between 150 and 300 kg. Its body is wide, as is its head and neck, with which it makes its way through the undergrowth of the tropical forests in which it lives. In addition, it has a very sharp and particular nose, since its shape is tubular, but the curious thing is that it is flexible, in such a way that it can move it from side to side to be able to detect the closest flowers, fruits and leaves and succulents which it feeds on. The tapir takes refuge in jungle regions, in humid areas very close to water, since it remains in the mud and water for a long time, which is why it is a very good swimmer and diver.  Argentina, Brazil and other areas.

It is a species of armadillo endemic to Brazil. It is one of only two species of armadillo that can curl into a ball. Adult armadillos weigh approximately 1.5 kg and measure 35-45 cm, not counting the 6-7 cm tail. It lives mainly in the caatinga (dry thorny scrub of northeastern Brazil), and also the eastern part of the cerrado (shrub savannah in central Brazil).

Learn more about our fauna!

Jaguars in Argentina and Brazil

Condors in Argentina and Chile

On 02/12/2022
Andean Condor: some of the best places to see them in Argentina and Chile

Antarctic animals seen during a Cruise

On 10/03/2020
Which types of Penguins can you see during a Cruise trip to Antarctica?

Whale Watching in Patagonia: where, how, and when to see them

On 30/09/2019
Whale Watching in Patagonia: information about the whales. When, how, and where to see them.

On 06/08/2019
Argentina's largest National Park: where rewilding is more than just a mission - is a fact.

On 12/01/2017
Every year, from october till march, thousands of penguins settle in different areas of Patagonia. These are some of the most incredible colonies: