Shared between Argentina and Chile, Patagonia rises as one of the most spectacular regions in the world. Ideal not only for an unforgettable Patagonia Honeymoon, but also for any other travel plans, this area is full of breath-taking spots. Here, some of the best attractions on the Chilean side:

The mystique of the Lakes District in Chile

The Lake District is a region full of lakes, rivers, volcanoes, mountains, forests, and great things to do all year long.

The scenery has been linked to Switzerland several times, due to its geographical similarities and the alpine villages built by the first settlements.

The sub-region of Araucanía is home to the iconic “Araucaria” trees (a type of cypress), and it´s a great place to enjoy and relax at one of the local lodges, such as Hacienda Vira Vira, in Pucón. Puerto Montt, it´s probably the most strategic point to connect all the highlights in the area.  It´s the arrival (or departure, depending on the direction) point for the Lakes Cross Excursion coming from Bariloche (Argentina), a spectacular and unique way to cross the Andes range through the lakes. The archipelago of Chiloé is a group of hundreds of islands, facing the Pacific Ocean, which largest one is Isla Grande. The traditions of the ancient inhabitants still present nowadays, and can be seen in different folkloric and cultural events. The flora and fauna in this ecosystem is very rich, including ocean wildlife. There are many ways to reach the Lakes District, either from Argentina (through the lakes cross excursion), or from many other parts of Chile, by land, sea, or air.

Also known as Ruta 7 or “Austral Route”, this highway consists of 1240 kilometers of winding road that connects its northernmost point, Puerto Montt (in Chile’s Lake District), and its southernmost point, Villa O’Higgins (in the Aysén region).

The road is always bordering Argentina by the Andes Mountains and on the west with the narrow channels and fjords of the Pacific Ocean.

What makes the Carretera Austral unique is the fact that it is the only highway connecting Puerto Montt and the deep and remote regions of Northern Chilean Patagonia.

This region is one of the least inhabited areas in Chile, with an average of less than one person per square kilometer living here.

Chaiten is the largest city at the northern end of the Carretera Austral. This wooden houses city is the gateway to one of the best national parks in Patagonia: Pumalín Douglas Tompkins.

One of two National Parks in the region that were established by Douglas Tompkins and a great place for hiking lovers.

Even though is not officially located on the Carretera Austral, Futaleufú is a charming town that is worth visiting.

With its numerous trails waiting to be discovered, it’s also known for being one of the greatest places in the world for rafting and water sports.

One of the highlights of the Northern Carretera Austral is Puyuhuapi.

This charming town stands out for its beautiful German architecture.

It also serves as a base to visit the Queulat National Park with its amazing hanging glacier.

Coyhaique is the biggest city throughout the Carretera Austral. It is a perfect place to stock up on food and other basics. 50 kilometers away is located the Balmaceda airport, making it a great transportation hub in the region.

The Parks main attraction is Cerro Castillo, with its three mountain peaks has been compared to Torres del Paine. It is a great place to watch huemules and other native fauna. 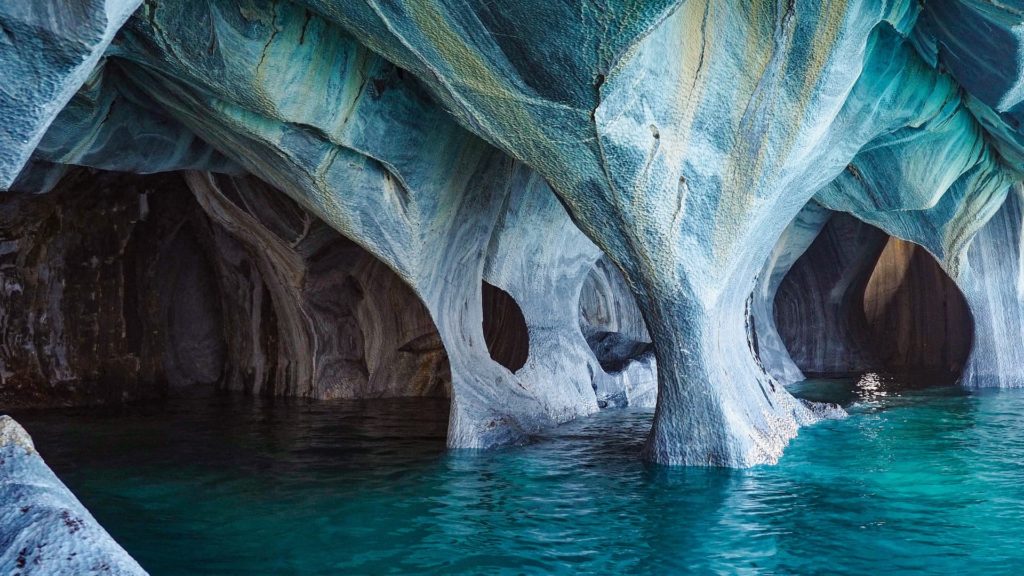 This is one of the highlights of Ruta Austral.

It’s incredible Marble Caves, whose swirls of blue, gray, and black marble against the glacial blue of General Carrera Lake.

Also, the trip along the shore of the lake to reach Puerto Río Tranquilo is truly amazing.

Located on the southeastern shore of Lake General Carrera, Chile Chico has a microclimate that differentiates it from the rest of the towns on the Carretera Austral.

In addition to the city’s favorable climate, Chile Chico works as a transition point for travelers leaving the Carretera Austral towards Argentina or for those coming in the opposite direction. It is also the gateway to the Jeinimeni Sector of the Patagonia National Park.

Clinging to the forested edges of a small hill and overlooking the blue waters of the Backer River, this settlement is unique in that it does not contain a single road.

On the other hand, the wooden walkways allow access from one side to the other. It is truly magnificent when the sun enhances the place and you can walk the trails practically floating on the water.

The city also has access to a handful of glaciers such as the Ventisquero Steffens and Jorge Montt.

Surrounded by dramatic mountains on two sides and situated on a flat plain at the bottom of the valley, Villa O’Higgins still feels owned by the landscapes that man has invaded. It is also the official end of the Carretera Austral.

The biggest attraction here is the access to the Southern Patagonian Ice Field, which is located south of the city. The most accessible glacier in this mountain range is the O’Higgins glacier, whose cobalt ice face can be seen crashing against the sparkling waters of the lake of the same name from a sailboat. The city of Puerto Natales, which was founded in 1911, is an important urban center within Patagonia. Located in the north of the region and located between the Pacific Ocean and the Argentine territory, Puerto Natales has wonderful geography of uneven relief, valleys, fjords, archipelagos, and mysterious white ice fields. Its irregular climatic conditions allow tourist activities that are enhanced by incredible architecture and natural landscapes. It also serves as a gateway to Torres del Paine.

The park was created in 1959 and it’s one of the best places in Chile for trekking lovers.

Aside from its numerous hiking trails, it’s also possible to do horse-riding, kayaking, mountain biking, sailing through its vast glacial lakes among many other activities.

It is also a great place for wildlife watching. Torres is home to the largest concentration of endemic Patagonia fauna. You will have the chance of spotting pumas, guanacos, condors, Maras, foxes among other species.

The Paine Towers – These three peaks give the Park its name, even though other peaks are higher, these are still the most iconic. Being the main attraction of the Torres Del Paine, they can be admired from multiple viewpoints.  If you like hiking, we invite you to check our Patagonia trekking tours section.

Los Cuernos – With 2600m of altitude, the Paine ‘horns are amazing rock formations that dominate the landscape for much of the W-walk.

Grey Glacier – The Grey Glacier is part of the immense Patagonian ice Field. You can reach the glacier by taking a boat trip over Lake Grey.

Nordenskjöld Lake – This emerald lake is an absolute visual wonder. There are several viewpoints around the shores of the lake that will leave you speechless.

Laguna Amarga – Stranded on the slopes of Cerro Toro, this bluish-green mirror trapped between massifs got its name from the high pH waters that give it its characteristic flavor.

French Valley – This beautiful Valley represents the middle section of the W-walk. Many consider this the most challenging part of the hike but also the most rewarding. This section of the park has plenty to be seen, with comprehensive views of peaks, glaciers, valleys, and lakes.

Salto Grande – This waterfall is one of the highlights of a day trip into the Torres del Paine National Park.

Punta Arenas is the largest city in Chilean Patagonia. Capital of the Region of Magallanes and Chilean Antarctica, Punta Arenas is located on the eastern shores of the Strait of Magellan that connects the Pacific and Atlantic oceans and separates the island of Tierra del Fuego from the mainland.

It has a population close to 140,000 inhabitants, which was formed thanks to the mixture of immigrants from the center and south of Chile and European settlers (mainly Croats, Italians and Spaniards). The city flourished in the latter part of the 19th century and the beginning of the 20th century, which is still reflected in its European-style architecture and the beautiful furnishings of the palaces in which the aristocratic families that ruled Patagonia resided.

In the surroundings of the city there are various points of great attraction, such as the penguin colonies of Magdalena Island and Otway Sound, Fort Bulnes and the route to Cape Froward. Due to its size and relevance, this city is the gateway to tours throughout Chilean Patagonia, especially to Puerto Natales and Torres del Paine to the north and the island of Tierra del Fuego to the west. It is also the main connection with flights to Antarctica.

Further south, the Chilean Fjords, the province of Tierra del Fuego (shared with Argentina), and Cape Horn, are part of some of the remotest itineraries onboard different kinds of boats.  Hanging glaciers, scarped mountains, and mythical landscapes, will surprise you at any step you do!

One of our favourite itineraries in the Chilean Fjords, is the Cruise from Ushuaia to Punta Arenas and viceversa (from Punta Arenas to Ushuaia).

In Beyond BA LATAM, we offer tailor made trips in Chile and Argentina, and we invite you to discover this region together; it will be our pleasure to help you plan your next great adventure to Patagonia!